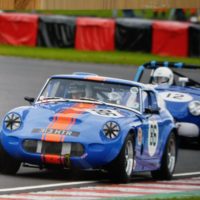 Group 1 race was in a Lenham GT, Sharing the drive with owner , John Hilberry. Wil having a first drive in the car in qualifying. He managed to get it 14th on the grid with a large entry in the class A (of which the Lenham is classified in). John started the race but was down in 23rd when he came in for the pit stop and driver change.

Wil driving the car at a very fast pace managed to get the car to 12th overall. John, suitably impressed such that has asked Wil to race the car again.

Group 2 Swinging Sixties Race was in The Datsun 240Z, which is the car that Wil is helping develop and share the drive with owner Dean Halsey. The car had a set-up after the last race at Croft Circuit, so qualifying was the first opportunity to test this. ‘That felt good and positive’ was Wil’s comment. After completing the necessary 3 laps for qualifying Wil put the car at the sharp end of the grid 7th overall and 2nd in class.

Wil started the race, there were brake issues but Wil managed to get the car up to 4th before handing it over to Dean at the pit stop. Dean eventually finishing in 12th overall and 4th in class. Originally finished 3rd in class but was given a 40 sec penalty for not turning the engine off in the pit stop but upon looking at our filming footage that confirmed the engine was switched off the penalty was not applied.

Another race finish for the Datsun, developments going in the right direction, onwards and upwards.

Next race at Donington Sept 9-10