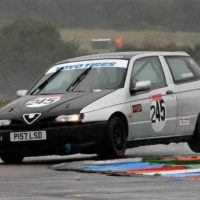 Thruxton is a circuit that Wil absolutely loves, so when asked by John Norrington, owner of The Alfa 145, did he want to race the car there?, Yes!

The weekend saw Wil driving in 2 races. Qualifying was good with Wil achieving Pole for CTCRC group. He was pleased.

In race 1. Wil had a slightly ‘fluffed start’ but got going and was catching the car that was in his class very fast but a 10 BHP difference between The Alfa and the next car meant that they were very close on the corners but as soon as they got on the straight the other car would pull away. This would go on till the end of the race and so Wil finished 2nd in the CTCRC group.

In Race 2. Wet! Just what Wil ordered. He loves the wet as he usually does well. Once again Wil found himself racing against the same car as in race 1. After 3 laps Wil was past and up to 5th overall. Not where an Alfa 145 should be with much faster and lighter cars in the race. As the race progressed the track was drying and in the next 3 laps was down to 8th overall. Fortunately, Wil had gained enough of a gap to the next car to maintain and finish 8th overall and 1st in the CTCRC group.