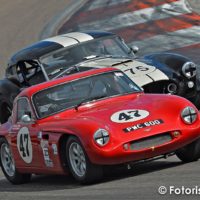 Wil was asked to race a TVR Grantura III owned by Malcolm Paul. He partnered Rick Bourne in the 2 hour GTSCC race at the Algarve circuit in the Historic meeting that is usually run at the end of October.

Wil was asked by Malcolm to bring the car home with a finish, preferably 1st in Class.

The race was started by Rick who had a blistering start going from 29th to 16th on the first lap. He maintained this until the driver changeover when Wil took over, 79 seconds ahead of the next GT2 car.. Just getting into his stint after 4 laps the safety car was deployed which ate into Wil’s stint and the lead whittled down from 79 secs to 10 secs.

The team decided that the other GT2 group cars were taking advantage of the safety car so Wil was called in for Rick to take over.

Whilst in the pitlane the car was down to 3rd in class and 25 secs behind 2nd in class. A stellar drive from Rick put the car back into 16th and 1st in class where it finished just 3 secs in front of the next GT2 class car.

With this result the team should be class champions and with a great chance of champions overall.