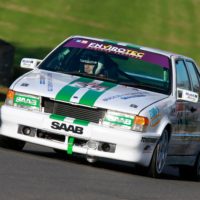 Wil has been helping the owner of this car, Steve Fields, with some driver coaching, in appreciation of the improvements he has made to his track driving, Wil was asked to race Steve’s Saab 9000 T16  Tin Top car in the Modified saloon race at Brands.

The car was 200Kgs overweight compared to the other competitors. Qualifying saw Wil fastest overall for a number of laps. The drying track then allowing the higher horse powered cars to do their thing. Final qualifying position being 3rd overall on the grid.

If the races were damp/wet Wil would be in his element but not to be. A dry track and Wil was overtaken by the modified cars. This did not deter him, the racer that he is made him determined to get a good result. 1st in class and 6th overall was a great finish to the first race.

The second race. Wil started well keeping in contention with the quicker more nimble cars. Again lying 6th overall and keeping some of the faster cars behind him with his knowledge of Brands Hatch, the water pump failed and Wil had to retire .

The team are very keen to get Wil back in the car next season. The team were so impressed with his race skills and testing skills. Wil’s knowledge and his feel on track for race cars means that the team were able to make improvements to the Saab that were invaluable.