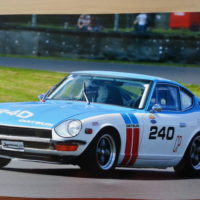 The meeting at Brands was greatly anticipated by both Wil and Dean as the 240Z had been improved and it would hopefully be more competitive with the big boys. Entry was made and we were told that we were 16th reserve. What a blow! The team still decided to attend and qualify just in case they were able to get a race.

Qualifying was once again early, Dean did the first 15 minutes of the 30 minute qualifying. Wil then went out for the remaining 11 minutes. On the 2nd lap Pole! for 10 seconds then overhauled by a very fast TVR. The car qualified 6th on the grid.

We were still reserves with numbers going down, eventually we were 1st reserve.

Dean waited in the pitlane just in case there was a non starter. Warm up lap and a car at the back of the grid had to be pushed off. So , start of the race and Dean was told he could race. Starting after the whole field had gone by , Dean had a super race going through the field.

Wil took over and along the bottom straight going at full speed, the car loses control. Wil thinks that the steering has failed but with 6 or 7 cars losing control too it materialised that fluid had been sprayed on track causing the problem. Wil decided to go into the pits for a quick check. All was good and he carried on to finish 2nd in class.

Considering that we were 16th reserve, a good day and a good result was achieved.